Posted on February 28, 2013 by The Mighty Thunderer

The very first classical music record I purchased, probably in 1972 or 1973, was “Chopin’s Greatest Hits,” played by Van Cliburn. I purchased it as much for mine, as for my mother the piano teacher’s, enjoyment. That little gem, containing a wonderfully lyrical and slow rendition of Chopin’s second Scherzo, Op.31, started me on my journey as a classical music fanatic that I’m still on to this day. 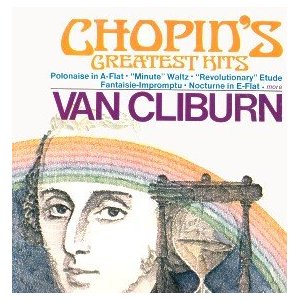 Chopin’s Greatest Hits, the first classical album I ever owned.

Read the rest at the Dallas Morning News.

Pianist Van Cliburn, one of the most celebrated musicians of the 20th century and a resident of Fort Worth’s Westover Hills suburb since 1986, died Wednesday morning at his mansion at age 78.

He was diagnosed with advanced and aggressive bone cancer in August and was noticeably frail at a September appearance at Bass Performance Hall.

In an unprecedented intersection of music, media and Cold War politics, Cliburn burst onto the international scene in 1958 as winner of the first International Tchaikovsky Competition in Moscow. The competition was widely assumed to be a showcase for pianists from Russia and its satellite countries. The surprising triumph of a tall, gangly, wavy-haired Texan with enormous hands, all soft-spoken politeness, was splashed all over newspapers, magazines and television screens. A Time magazine cover hailed “The Texan Who Conquered Russia.”

“In many ways, Van brought the United States into the classical music world of the 20th century after World War II,” said Joseph Polisi, president of the Juilliard School in New York, Cliburn’s alma mater. “His triumph at the Tchaikovsky Competition was not only an exceptional achievement in its own right, but a symbolic representation of the quality of music-making in America.”

So daring was the jury’s choice that it required the approval of the Soviet Union’s new premier, Nikita Khrushchev. But the 23-year-old pianist, whose playing had an unhurried grandeur that seemed from another age, had already enchanted the Moscow audiences. In years to come, his repeated returns to Russia would continue to draw adoring crowds. Cliburn became, in effect, a powerful ambassador for peace between two rival superpowers.

“Van looked and played like some kind of angel,” Russian pianist Andrei Gavrilov told Cliburn biographer Howard Reich. “He didn’t fit the evil image of capitalists that had been painted for us by the Soviet government.” […]

Rest in peace, Mr. Cliburn, and thank you.

About The Mighty Thunderer

We write about music, audio, and technology. Like the namesake of this blog, Ludwig van Beethoven, we are hammer of polite society. We will point out the absurd and educate on the sublime...
View all posts by The Mighty Thunderer →
This entry was posted in Classical Music. Bookmark the permalink.